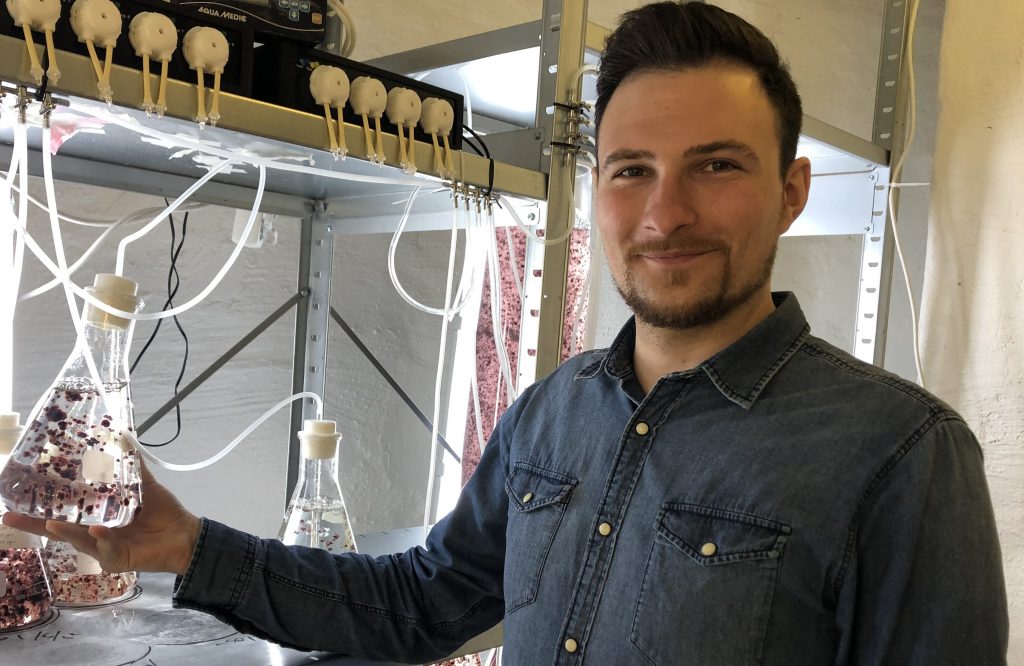 Fredrik, Leo and Angelo: Cutting up to 4% of global emissions by feeding cows with seaweed

Fredrik Åkerman, Leo Wezelius and Angelo Demeter are three young enthusiasts on a mission to reduce 4% of the global greenhouse gas emissions, through feeding cows with a special red seaweed. Cows produce more than 5% of the global greenhouse gas emissions globally, just by farting and burping methane gas. That is more than twice as much emissions as all the world’s airplanes combined. But thankfully, over six years of research has now been published showing that by supplementing a small amount of a special red seaweed to the diet of cows, their enteric methane production goes down by up to 80%. So, in 'Volta Greentech', the team is now on the way to establishing the first on-land commercial scale production of this specific red seaweed to make it the new industry standard for the dairy and beef industry.

To start from the beginning, Fredrik was in high-school when he first came to know about the effects seaweed has on cows. At the time he was busy with school, but six years later he found himself on an exchange term at UC Berkeley in San Francisco reading a fresh research publication from the partner university UC Davis confirming the findings on real cows. Right at that time he was taking a course in entrepreneurship and naturally started looking into possible ways to develop this seaweed commercially. Shortly thereafter he involved his friend Leo who he had met a year earlier during New Years party. That night the two had bonded over their shared passion for entrepreneurship and were now equally restless in their pursuit of an engineering diploma. Needless to say, when the opportunity of starting a business presented itself it was not a hard decision to put their studies on hold to pursue the development of the idea full time.

Then Angelo came into the picture. As the universe would have it, Leo met Angelo one year after he met Fredrik at another New Years party. Completely oblivious that their paths would coincide in the near future, they spent the night partying and not talking about their common interests. Two months later, while scrolling through his Facebook feed, Angelo recognised Leo’s face on a post, so he decided to give him a call to check what he was up to. Leo started telling Angelo about the project, when it came up that Angelo had recently received a degree in biology and specialised in the food industry. That was when the magic happened, Angelo had the perfect experience that was needed at that moment for Leo’s and Fredrik’s project. Immediately after, Leo put Angelo on the phone with Fredrik, and the team had become a trio.

During the summer, the team applied to participate in the yearly held Brilliant Minds conference pitch competition Open Minds and won. “Presenting the final pitch alongside Barack Obama and Greta Thunberg, Fredrik made our mission statement clear: get this seaweed out to as many cows as possible, as fast as possible”. About a month later, the team had raised 3 million SEK from angel investors and founded the company.

Soon after the appearance, Ian Tuart, an algae expert with more than 10 years of experience producing seaweed at scale in Australia reached out with an interest in their venture. That same year he moved to Stockholm with his wife and dog to join the team full time. Located at Kungsholmen in central Stockholm, the team set up Volta Labs; the heart of Volta where the science team are now developing the production recipe optimised for cultivating the seaweed at scale.

“The Republic of Cattle” ranks third in greenhouse gas emissions. This was a statement Bill Gates made referring to the 1.5 billion cows that together generate some 5.0 Gigatons of CO2 worldwide. This accounts for around half of China’s share and almost as high as the USA total share of CO2 emissions. “We came across the new research findings about seaweed around the same time Bill Gates’ quote. And no one was actually working with it. That’s when we put 2 and 2 together” says Fredrik.

The science behind is very simple. Cows cannot by themselves digest the cellulose from plants, so instead the microbiome in their rumen helps them digest the cellulose through fermentation. Some of the bacteria though, will ferment cellulose and produce methane as a byproduct that cannot be used by the cow. According to Angelo, up to about 12% of the potential energy from the cattle feed is sequestered by the methanogenic bacteria and goes directly to methane production. As a result of these processes, methane (CH4) is released in a gas form (burped and farted).

However, by adding a small amount of the red seaweed Asparagopsis to cows’ diet, their digestion takes a different metabolic path. In short, macro-algae contain high levels of bromophenols, are bioactive compounds that bind into the enzymes used by methanogenic bacteria to produce methane. This leads to hydrogen (H2) and CO2 being generated in a gas form blocking the majority of methane generation. The spare hydrogen is then used by other ‘good bacteria’ to produce volatile fatty acids (propionic acid), which in contrast to methane is a direct energy source for the cows, essentially unlocking more energy in the form of hydrogen and carbon.

Preliminary tests show that by adding only a small amount – 100g per day (approximately 0.5% of the total dry matter intake) – of Asparagopsis to the cow’s diet, their enteric methane emissions can be reduced up to 80%. However, Angelo points out that the latest animal trial done at the Swedish agricultural university SLU using Volta’s own seaweed from Volta Labs showed a 99.2% enteric methane reduction at 1% inclusion rate after 48 hours.

Now, the team is rehabilitating a 500sqm facility in Lysekil, a few kilometres north of Gothenburg on the West coast of Sweden which was previously used for growing shrimps on-land. This facility provides them with the perfect conditions for growing seaweed in a controlled environment. So far, there is no other facility of the like anywhere in the world to produce this specific seaweed on a large commercial scale. Most types of commercial seaweeds are harvested in the wild, or by laying ropes in the sea where the seaweed gripples on. However, this technique does not allow for controlling salinity, sediments and other factors. Therefore, the facility will provide them with a closed system with a controlled environment. “This gives us access to 365 days of production in a year, and maintaining the quality standard, which you cannot get in sea farming because of seasonality”, explains Angelo.

Aside from the production, the other challenge is to build a business model for the feed supplement. “We started talking to a lot of companies in the food industry to be able to build a business model that could attract investment”, Leo explains. They quickly got in touch with major retailers in Sweden, and through them with their suppliers. By looking at the whole supply-chain, they could identify how the costs of the solution could be distributed. “In the beginning we thought the best way would be to approach farmers directly, but we quickly learned that the top of the value chain would have the biggest impact and influence over the whole system” Leo explains. To formalise the collaboration, they signed contracts with few of the largest retailers in Sweden and their respective suppliers of dairy and meat products.

There are many ways in which the different stakeholders could get value from this. One possible model is to incentivize farmers with a better price for methane-reduced milk financed by a consumer premium. Alternatively, through the carbon credit market, farmers could make money by generating “emission credits” similar to carbon credits, except this actually reduces emissions instead of compensating for them after they have happened. The precise business model is yet to be established as a part of the ongoing industry pilot projects.

According to Leo, the purpose with 'Volta Greentech' is to reduce greenhouse gas emissions from one of the biggest sources. “We are agnostic to whether one should eat meat or drink milk or not” Leo emphasises. “We are neither promoting meat and dairy consumption, nor judging consumers, what we want is to reduce emissions, and to do it fast” he adds. “There are roughly 1.5 billion cows on the planet, and whether we like it or not, they will stick around for a while”. Therefore, Leo thinks there is no time to wait for a change in consumer behaviour. Instead, they propose a solution that can have a major and fast impact within the existing systems.

Leo continues: “We want to unite people on a common purpose – if we can all agree that there is a need to reduce emissions, we have a common ground, in spite of personal choices”. By communicating about the impact of methane, they are hoping that people will understand the value of buying methane-reduced products. “This is also a clear way of empowering the consumer”. “My personal dream with Volta, is not just to produce a solution, but to influence people’s choices – to create a movement that everyone can be part of where they feel empowered to contribute to a substantive change”. “The current narrative of humanity is negative, passive and outright dangerous” Leo emphasises. Therefore, his ambition with 'Volta Greentech' is to rewrite the narrative and set humanity on a sustainable path.

The ambition with 'Volta Greentech' is that methane-reduced practices become the norm, and ideally enforced by regulation. “Relatively speaking, legislative action is a long-term ambition, but both we and the industry know it is going to happen eventually because of the huge potential impact in climate change mitigation and all the positive side effects”, says Leo.

Apart from reducing greenhouse emissions. Volta Seafeed can have multiple benefits for retailers, farmers, and those in between, namely dairy and meat producers. Farmers can increase productivity, while retailers and others can hit the growing market for environmentally responsible products. Moreover, the production process will utilise clean energy and industrial heat waste, and also has the potential to uptake up to 1 000 tons of CO2 from the atmosphere annually (and up to 3 800 tons of CO2 after optimisation).

Right now, the challenge is to produce the biomass and get the business up and running. Volta Factory 01 is already underway and expected to be fully operational in 2022 with an initial capacity to feed some 12 500 cows with Volta Seafeed daily. However, by maximising production capacity and quality, this would increase the capacity to feed up to 100 000 cows.