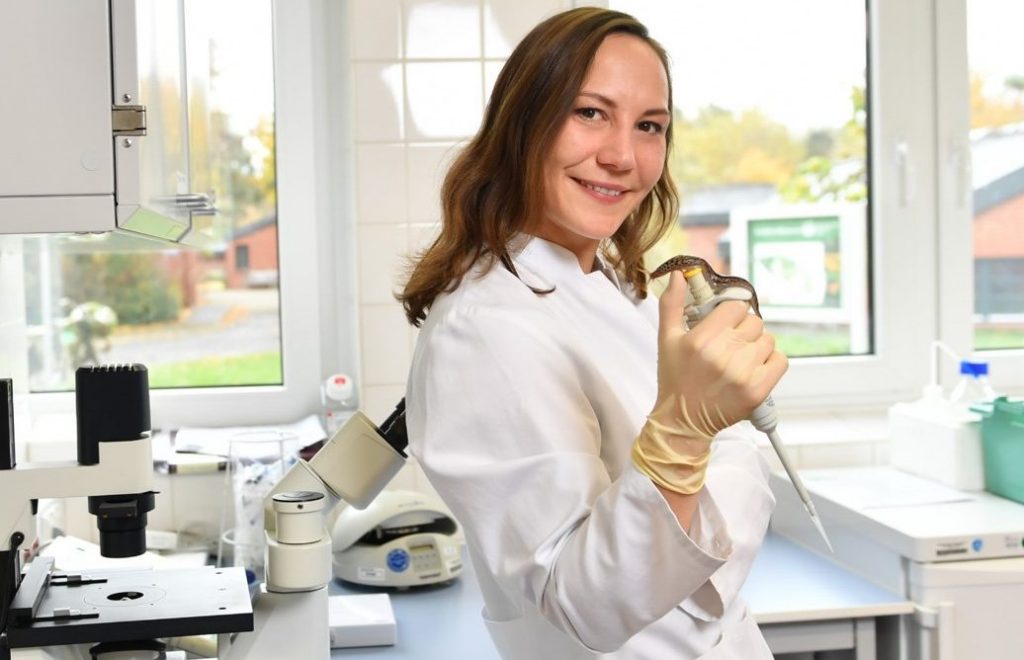 Nadine Sydow’s unique invention, 'Schnexagon', or ‘slugs-are-gone’ in English, is a product to stop slugs and snails from climbing into slot gardens, while protecting biodiversity. In Nadine’s words “it´s transparent – you can’t see it and can’t smell it – the slugs don’t die; they simply can´t stick to it”. Nadine, who is based in Kiel in Northern Germany, has a passion for developing new materials that can provide more sustainable solutions to existing products.

'Schnexagon' is an ecological alternative to chemical pesticides and works like a paintable protective fence against slugs. The product is applied directly onto vertical surfaces using a regular paintbrush. A natural combination of natural oils and surfactants prevents slugs from sticking onto the surface and they simply fall off. This way, slugs survive, and biodiversity is protected. The main target group are private gardeners - people who put a lot of love to their plants and vegetable plots, using the product to avoid slugs destroying their plants.

Today, the product is mainly marketed in Europe, but Nadine is hoping to expand to other countries were problems with slugs are recurrent. With climatic shifts, slugs, and particularly invasive species are moving into new regions, for instance of northern Europe.

Despite winning a pitch competition for start-up companies, pulling-off this niche business-idea proved to be a big challenge. Yet, against all odds, Nadine’s persistency finally paid off when she met her current business partner, who supported her idea. Together they founded the company Solvoluta and patented 'Schnexagon'. Today the product is sold in various market leading ‘do-it-yourself’ (DIY) stores in 5 different European countries.

When spreading poison against slugs, we are altering ecosystems balance. Yet, slugs are an important part of our ecosystem. They eat vegetables, fruits and other plants and produce nutrient-rich compost, which is then used by animals and plants. With the arrival of the so-called ‘Spanish snail” to northern Europe, many have increased the use of poison to combat the invasion. Being new to the ecosystem, the Spanish snail does not have a natural predator, and thus proliferates more rapidly. However, by adding poison we are affecting the native slugs disproportionally, while the Spanish snail prevails. Using 'Schnexagon', instead, can help protect native slugs and the balance of the ecosystem.

After receiving her master’s degree in biology at the university of Kiel (CAU), Nadine was contemplating her future options. Lab work with no practical application did not appeal Nadine at all. She then joined the working group on "Functional Morphology and Biomechanics" at CAU. At that time, researchers had developed a tape that mimics a gecko´s adhesive foot structure which sticks to surfaces just due to physics. When travelling to Thailand, Nadine saw the potential of marketing a related product, aiming to prevent a gecko´s attachment for certain areas. However, getting rid of slugs appeared to be a much more relevant local problem. That day the story of 'Schnexagon', or “Slugsaregone” began.

Nadine tested over 400 materials trying to find something that slugs would slip from, but in her words: “slugs stick to everything”. About to give up, Nadine and an Israeli guest student randomly figured out that the combination of gypsum and soap was the first successful step towards a magic recipe.

After winning the first prize at an idea competition, Nadine was eventually taken seriously and was able to promote her idea within her expanding network. Still, funding remained a major challenge. Therefore, Nadine came to the idea of using crowdfunding. “This required a lot of work and promotion, and I was able to collect 18.000 euros, which was still not enough to found a company”.

Finding her “business angel”, by aid of the Northern German Startup community,  Nadine was finally able to take the next steps and scale-up. In 2016, after 2 years of intense work and overcoming all the challenges, 'Schnexagon' was available on the market and sold in hundreds of DIY stores.

As a side-effect of the crowdfunding and the successful market entry, Nadine was invited to present her idea at a German TV show in Cologne, where investors make proposals ‘on-live’. She was offered a deal of 500.000 Euros for 30% of the company’s shares, a proposal that seemed too tempting not to take. Yet, after negotiations with her distribution partners she refused the deal, and instead she sealed a sales deal. This was a smart move according to Nadine. “We were able to keep all shares of the company, and got a lot of marketing and an exclusive teleshopping opportunity from the show”.

Pulling off such an original business idea proved to be rather challenging. Before the business finally kicked-off, Nadine and her business partner had to go a long way convincing people before receiving any funding. Also, most people would not really care or be aware of the relevance of slugs in nature, so keeping them alive may not be their top priority. Also, slugs are getting rarer in Germany due to dryness related to climate change, influencing the demand of her product. Still, as the climate zones are shifting, and other markets may open up in countries with a more humid climate.

Moreover, being a woman working with natural sciences and sustainability in the DIY scene is still something rare and challenging Nadine, however, found this also to play on her own advantage as it catches attention and opens new opportunities.

Being flexible and adventurous was an important factor for her success: “you need to plan well enough to have some spare time, but you always need to be flexible and adjust to new offers and developments.”

Nadine is currently busy looking for new markets to expand the distribution of 'Schnexagon'. At the same time, she is working on other ecological-friendly products. However, her biggest ambition for the future is to develop a sustainable anti-fouling product for ships, but “this is very hard” she emphasises. Anti-fouling products are used to cover boats to prevent barnacles and algae to attach to the surfaces that lay underwater.

The standard products used today are incredibly expensive and /or highly polluting. “I want to develop more sustainable technologies – I am testing with many materials in the Baltic, but this is still a long way to go”. As she neatly puts it, “this is like a Thomas Edison story, I do not know what works, but I know 10.000 ways that do not work”. Yet, with her natural curiosity and a long trial-and-error, Nadine hopes to find the right recipe.

Find the story-map of Nadine here

Are you curious to find out how close libraries or pharmacies are in the Nordics? #NordicServiceMapper can tell you! An #onlinemappingtool, it helps visualise the proximity to different types of basic services across the #NordicRegion. Find out more: https://nordregio.org/a-large-gap-in-distance-to-basic-service/

Demand is one of the most common explanations for the increasing #housingprices. The Nordic Economic Policy Review 2021 analyses other potential reasons for the ever-increasing building and land costs in Sweden. Join the launch of #NEPR2021 on 5 May: https://nordregio.org/events/housing-policies-in-the-nordics/

"Whether or not #Nordic Co-operation is at risk following the #pandemic, it is clear that pandemic has brought the role of borders, and the role of Nordic co-operation onto the political agenda” - @mwoien, @Nordregio in pod of @UISweden! The report: http://pub.nordregio.org/r-2021-6-crossborder-covid/#

#Buytolet is a big part of the #housingmarket in Oslo and Helsinki. The trend is less present in other Nordic capitals due to regulations. In the #NEPR2021 report, @erlendebo analyses the influence of buy-to-let on #housingprices. Join the 5 May launch: https://nordregio.org/events/housing-policies-in-the-nordics/