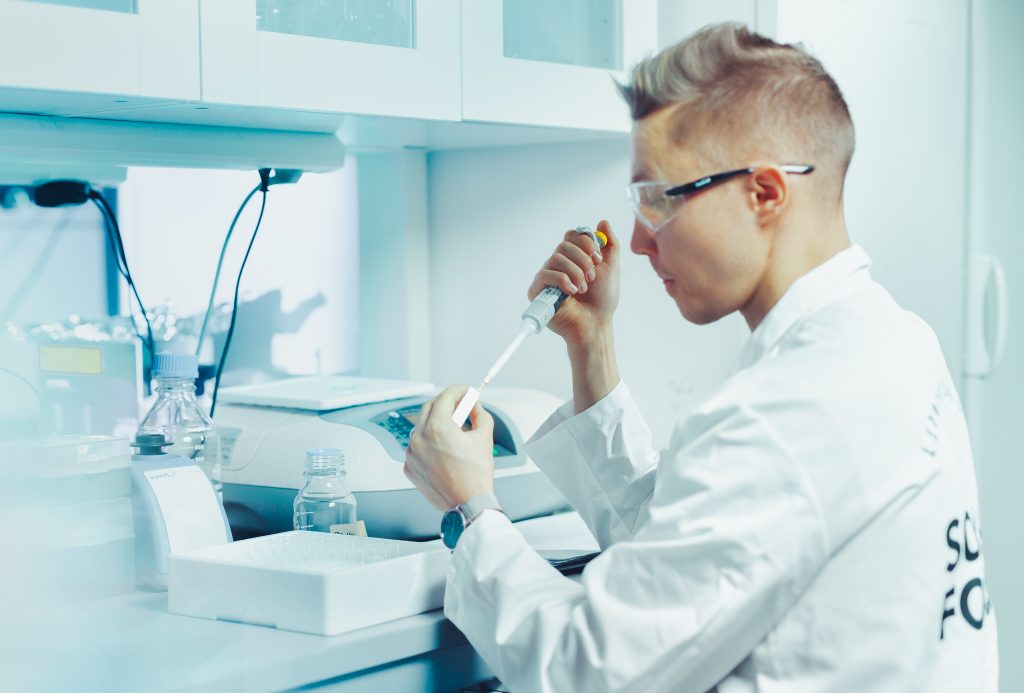 Not far from Sci-Fi, the gamble of Sami Holmström and 'Solar Foods' is to produce protein in a lab that could be placed in the Sahara Desert, the arctic, or even the space. The resulting product, Solein®, promises to revolutionise food production by completely replaced the animal and plant based standard. By cutting the use of water and land to a fraction of what plant and meat production require today, 'Solar Foods' foresees enormous environmental and social gains.

How does the production work?

Just from the beginning of 'Solar Foods', Sami joined the company with the mission of producing protein out of renewable electricity and CO2. “Everything happens in a fermenter – just like brewing beer” explains Sami. But instead of barley or wheat they feed the microbes with water, nitrogen and CO2.

'Solar Foods' first collected microbes from the Finnish nature. These are put into the fermenter filled with a liquid or ’medium growth’. Bubbles of hydrogen and carbon dioxide, and nutrients including nitrogen, calcium, phosphorus and potassium are continuously supplied into the medium. Plants normally absorbs the same nutrients through their roots in nature. Then, as the microbes eat and grow the liquid turns thicker. Gradually, parts of this liquid is removed and dried. The result is a powder of single-cell proteins containing up to 65% protein. The macronutrient composition of the cells is very similar to that of dried soy or algae. This powder, which goes about with the brand name of Solein®, can then be used as the protein supplement in existing products, or be transformed into a variety of new ones.

“Solein is expected to be used as a protein ingredient in existing foods such as bread, pasta and plant- based dairy, drinks, and between meals. Secondly, Solein is planned to be used as a protein ingredient in meat alternative products. And thirdly, if laboratory-grown meat production scales up in the future, Solein could provide the amino acid platform that real meat cells could use to grow”. Therefore, 'Solar Foods'’ technology should be seen as a platform technology used for disconnecting food production from agriculture in a strategic way, rather than just the production of a protein ingredient”. Right now, they are researching and developing Solein and possible applications also in collaboration with Fazer, one of Finland’s largest food corporations.

Sami has a biotechnology degree from Turku University of Applied Sciences and a background in bioprocess engineering. He spent some 10 years working at the Technical Research Centre of Finland (VTT) where he gained substantial experience with fermentation processes, including the screening and isolation of microorganisms. It was there where he got to work with Juha-Pekka Pitkänen, 'Solar Foods' co-founder and CTO, who then lured Sami to join the new venture. “I am passionate about food and the environment, and by working with 'Solar Foods' I am able to produce new kind of food without harming the environment”.

'Solar Foods' is now over two years old and was established as a spinoff from a research project carried by VTT, and the Technical University of Lappeenranta (LTU). The project aimed at finding a useful application of CO2 and renewable energy. Initially they thought of producing chemicals – but then food became a more interesting choice. Sami recalls that this form of protein production “was initially studied by NASA in the 1960’s but it is only now with the increased generation and affordability of renewable energy that has made this possible”.

Sami’s previous experience with screening organisms would be the key for this new responsibility. As the responsible for the laboratory and testing, Sami’s first challenge is to identify and isolate the appropriate microbe from the Finnish wilderness.

Fermentation is an old invention and no major breakthroughs were necessary, however, “what we have done is groundbreaking” Sami emphasises. There was no blueprint for how to do it, which organisms to isolate or how to maximise efficiency. Nevertheless, after a lot of testing great progress has been made.

The expected environmental and social impacts of Solar Food products are huge. Today, one quarter of the global greenhouse gas emissions generated from human activity originate from the food system. As the global population and standard of living continue to increase, the consumption of animal-based protein is expected to significantly intensify. That will lead towards a completely unsustainable track for the planet. Instead, 'Solar Foods' proposes a fundamentally different and efficient food system. The idea of producing food from ‘air with clean electricity’ is based on the vision of disconnecting food production from agriculture. By doing so, economic growth can be decoupled from an increasing use of natural resources.

According to their estimations, the production of Solein requires 100 times less water than plant-based biomass, and up to 500 times less than beef. At the same time, it produces 5 times and 100 times less CO2 emissions respectively.

Moreover, Solein production is completely independent from agriculture. “You don’t need to cut the forests to expand arable land, on the contrary you can re-grow them”. “If we could replace meat with Solein we could release vast land areas and significantly cut water use”.

Additionally, this technology is not affected by weather or climate “Solein can be produced in the desert, the arctic or even the space”. This could potentially transform the geographies of food production while having an important effect on food security.

Strengthening the sustainability trend requires empowering individuals with the choices they make. Therefore, it is the role of companies and start-ups like 'Solar Foods' to deliver alternatives that give people the opportunity to make those choices.

The biggest test now, is how to communicate and reach the market acceptance. “Like everything new, it takes time to introduce”. “We don’t see people eating food as pills in the future, instead people will enjoy food with taste and their common properties also in the future”. The challenge is therefore to get Solein to be used as a protein ingredient in existing foods that are familiar to most people such as bread, pasta and plant-based dairy, drinks and ready-meals. However, 'Solar Foods' has already received a lot of interest, and “it is really the right time to innovate in the food industry to deliver more sustainable alternatives”. Moreover, 'Solar Foods' has a truly cross-disciplinary team, which has proved to be an asset in affronting challenges and communicating to companies and decision-makers.

'Solar Foods' is currently operating in a pilot plant producing 1kg of protein powder per day. At the same time, they are building and designing a demonstrator, which “is a mini scale of the full-scale factory”. The demo plant will be a replica of the full-scale facility to be built with a capacity of producing 300kg of Solein per day.

Furthermore, the next major step is to get the licence from the European Food Safety Agency (EFSA) to introduce Solein to the market. EU regulations for ‘Novel Food’, or food products that have not being consumed by humans before, “are the tightest in the whole world”. New products need to undertake rigorous tests and analyses that assure safe consumption. 'Solar Foods' expects be on the market in 2022”.

For Sami, “the possibility that we can really make a difference in this world in the future is also an important motivator, but what gets me out of bed every morning is the interesting work that is happening in the lab” he states in the company’s blog.

Find the story-map of Sami here

Are you curious to find out how close libraries or pharmacies are in the Nordics? #NordicServiceMapper can tell you! An #onlinemappingtool, it helps visualise the proximity to different types of basic services across the #NordicRegion. Find out more: https://nordregio.org/a-large-gap-in-distance-to-basic-service/

Demand is one of the most common explanations for the increasing #housingprices. The Nordic Economic Policy Review 2021 analyses other potential reasons for the ever-increasing building and land costs in Sweden. Join the launch of #NEPR2021 on 5 May: https://nordregio.org/events/housing-policies-in-the-nordics/

"Whether or not #Nordic Co-operation is at risk following the #pandemic, it is clear that pandemic has brought the role of borders, and the role of Nordic co-operation onto the political agenda” - @mwoien, @Nordregio in pod of @UISweden! The report: http://pub.nordregio.org/r-2021-6-crossborder-covid/#

#Buytolet is a big part of the #housingmarket in Oslo and Helsinki. The trend is less present in other Nordic capitals due to regulations. In the #NEPR2021 report, @erlendebo analyses the influence of buy-to-let on #housingprices. Join the 5 May launch: https://nordregio.org/events/housing-policies-in-the-nordics/