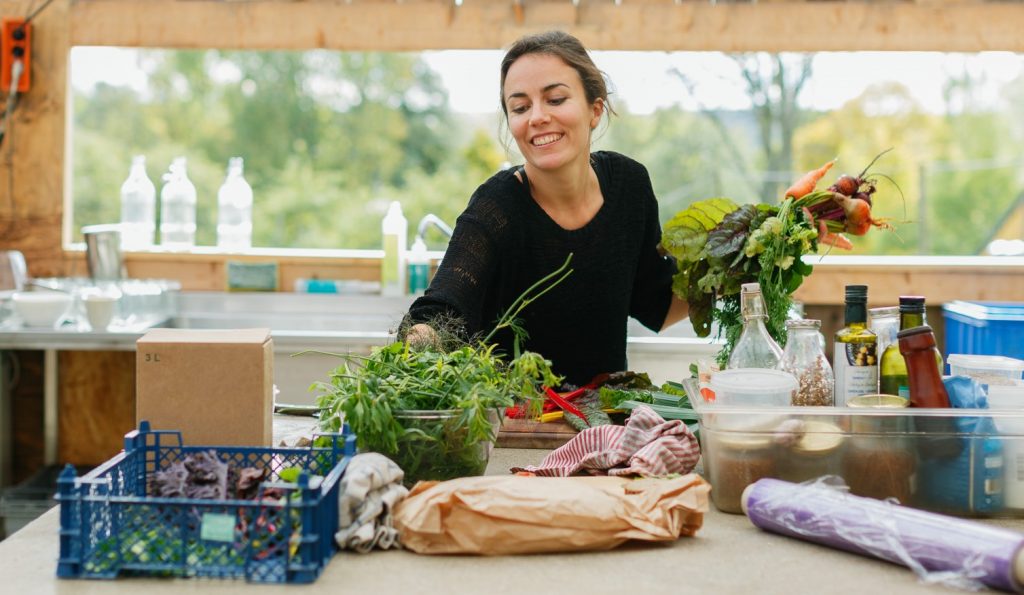 Simone works at Under Tallarna, a small-scale farm initiated by a bunch of young enthusiasts passionate about self-sustaining lifestyle and sustainable living. The farm is managed under the community support agriculture (CSA) model, where the clients become members of the farm. This eliminates the need for intermediaries securing a more fair and stable income for the farmers and a reliable product to the clients. Farming farmers is, however, Simone’s biggest ambition. She organises events for anyone to try out what it is to be a farmer and to learn about sustainable living.

Growing up in Järna, a well-known nature-oriented community outside of Stockholm, Simone became conscious about the environmental crisis from an early age. She got interested in the ‘Transition’ movement, a grassroot community that seeks higher self-sufficiency and generating change locally. Therefore, Simone started to get involved in various , mostly informal, initiatives to change things in the community around her. Simone identified many things that did not work well in society and became determined to take responsibility in her own hands.

Simone came across Under Tallarna when looking for a place to launch ‘Transition Järna’, a LEADER project promoting and facilitating a place-based sustainable development in the community.

At that time, Under Tallarna was a small-scale cooperative farm initiated one year earlier by four young guys that wanted to produce their own food and promote community based development. Two brothers, Ossian, a chef, and Robin Tidblom, a gardener, have been there from the beginning. The two saw that there was a big gap between farming and consumers, and wanted to create a bridge between them, “to get consumers closer to the soil” Simone explains. “They wanted to create an 'Oasis' for sustainable living; a pocket of utopia and resistance” she adds. Under Tallarna was, therefore, conceived as a platform for exploring change.

After that, “I fell in love with the idea of working with that vision and not only talking about it” Simone recalls. She noticed that being action-oriented was more fulfilling than protesting about the things that don’t work. “I don’t feel good always working ‘against’ - I rather focus on the positive sides”, she adds. Simone discovered that farming makes her feel good while doing the right thing, "it gives me a lot of freedom” she tells.

It all started with small boxes in municipal rented land – “more like a social project”. Even though the accessibility was not the best and the land was not prepared for this purpose, they chose this location because of the close interaction with the community around it.

In the beginning they didn’t get much support from local authorities. “Back in 2012 no one was thinking in small-scale farming, all the focus was on scale farming”, Simone notes. Benefits and subsidies from the EU and the state for agriculture are all based on a certain scale or volume. Simone explains that “surviving as a small-scale farmer is really hard”. “Seeds are often patented and you have a lot of competition from farmers that have no sense of social and environmental responsibility, and the farming season in Sweden is much shorter than other parts of the world”. On top of that, the long line of intermediaries and retailers keep up to 50 or 80% of the earnings.

Under Tallarna bypasses many of these challenges through the community support agriculture (CSA) model. The CSA is a form of cooperative agriculture or subscription model, where the producer and the consumer work in partnership. Today, the farm has 120 shares distributed to restaurants, two preschools and several local households. Establishing a closed system saves “a lot of costs by skipping intermediaries, logistics, administration, selling” and also reduces waste significantly, as clients “buy everything even vegetables that have odd shapes and sizes”. As Simone describes, a trust relationship is built between the two, in such a way that “we can focus on farming, and the clients are guaranteed fresh and healthy products”.

In spite of a general lack of support to small-scale farming, the CSA is a very resilient model. Simone explains that a bad year for a small farmer can be the end of the business, but “with this system the community can support the farm”. Likewise, “the farm can support the community in times of crisis” she notes. The CSA has proved to be incredibly advantageous during the COVID-19 crisis precisely because of the partnership that is established with the client. Regardless of the external circumstances, their clients remain loyal, “we did not need to suddenly look for new clients”, Simone explains. Additionally, the farm has a high degree of self-sufficiency. Apart from seeds and manure, they receive “very little input from outside”. This, according to Simone, makes the farm and the community less vulnerable to threats from the outside world. Therefore, this mutually beneficial model makes it viable for small-scale farmers, while also making sustainable agriculture more accessible to local communities.

Today, Under Tallarna has about half a hectare of productive land from which they produce enough vegetables to 120 clients (members) from May to October. Many local politicians have gained interest and are now proud of the strong socially and environmentally sustainable movement and economy that has developed in the Järna area. Simone notes that “there are some 50-70 of these CSA in Sweden today”. And according to her, “conscious, environmental and social sustainable businesses employ many people” in the Järna area today.

Under Tallarna is interesting also in many more ways. Many experimental projects are taking place, they work with leadership, and with social change. For instance, they are now participating in a collaboration with the Swedish Board of Agriculture, and other five farms. The project aims at identifying perennial vegetables that are adapted to the swedish climatic conditions and that are adaptable to climate change. This can provide useful knowledge about plants that can be used for human consumption and that can create a symbiotic relationship with other plants. Simone explains that putting different plants together, with different harvest seasons, helps retain nutrients and water in the soil and increases biodiversity.

More recently, Simone and team are especially focused on “farming farmers”. According to Simone, the average age of famers in Sweden today is between 60-65 years old. At the same time, the younger population is detached from agriculture, which in Simone’s opinion, is not only a job but a lifestyle. This poses some serious challenges to the future of farming, food security, and rurality in general, with culture, traditions and communities that make part of it. That’s why “I want to inspire more young people to become a farmer” adds Simone.

Simone sees “why people are not attracted to sit on a tractor all day long”, and know it is hard to make a living from farming. Therefore, her ambition is to “generate better conditions for farmers and show that it is possible to live from it through creative and fun ways”.

Simone and her team organise ‘working days’ for people to try out what it is to be a farmer, grow vegetables, and build a community. These working days also provide a space for philosophical reflections on lifestyle and the benefits of sustainable living. Today, some 5.000 people visit every year interested in learning from their experience.

Under Tallarna also hosts a ‘harvest party’ every year, with food and drinks made of the farm’s vegetables in celebration of the seasonal yields. Friends and those who have been active during ‘working days’ are invited to gather for this celebration.

Local politicians have been invited to participate at some of these events, to share their views of Under Tallarna and to learn how they can support small-scale farmers in the wider community.

Find the story-map of Simone here